A collection of golf news, thoughts and notes from the week which saw Queensland’s Cameron Smith win on the Gold Coast, Dylan Frittelli won in Mauritius plus Rickie Fowler stormed home to secure the Hero World Challenge title beating 17 other players, including Tiger Woods, convincingly.

After three consecutive top five finishes Cameron Smith had the form to win the Australian PGA at Royal Pines on the Gold Coast but needed a playoff to see off Jordan Zunic after they both finished at 18 under.

Sunday’s action started earlier than planned with thunderstorms forecast and that wasn’t the only surprise. Smith had to deal with a heckler before he took a bogey on the last which meant the duo headed down 18 again. Smith, 24, eventually won it on the second extra hole.

American Fowler produced a stunning final round of 61, a course record at New Providence, to win going away by four strokes at the Hero World Challenge in the Bahamas. Tiger Woods returned and finished T9 with rounds of 69-68-75-68 but Fowler was sublime having started the day seven strokes adrift of Charley Hoffman who eventually finished second at 14 under.

Australia didn’t have the only European Tour action with the co-sanctioned event in Queensland’s South-East sharing ET status with the Mauritius Open won by South African Dylan Fritelli. The tournament, also sanctioned by the Asian Tour and Sunshine Tour, also had a playoff with Fritelli needing only one extra hole to beat Arjun Atwal. However the Indian will rue the 72nd hole where his lipped out eagle putt would have handed him the title.

The week the Ladies European Tour culminates in the Middle East with the Dubai Ladies Masters taking place whilst the team event, the QBE Shoot-Out, for the PGA Tour occurs at the Tiburon Golf Club which hosted the LPGA’s season-ending event recently.

Players I’m interested to see how they go with notes related to capital investment if that’s your thing. Randpark Golf Park hosts the Joburg Open which is co-sanctioned by the European Tour and the Sunshine Tour. The large field of 240 will be spread across two courses for the opening two rounds.

20 to 50: Dean Burmester.  The Zimbabwean-born golfer has won in South Africa already having claimed the Tshwane Open in March and was T4 in the European Tour’s season-ending event plus he finished T11 when this event was held earlier in the year before it’s move.

20 to 50: Romain Langasque. The Frenchman returned to form finishing third in Mauritius and was T11 at this event in March.

50 to 100: Aaron Rai. The Englishman was T7 when the tournament was in March at Royal Johannesburg and Kensington venue and the following week he won the Kenya Open. Rai missed his last two cuts but was eighth in October in Andalucia.

50 to 100: Ockie Strydom. The South African has three top nine finishes in his last four starts including a T9 last weekend and locals have a terrific record in this tournament.

100 to 200: Jacques Blaauw. The South Africans was T6 at the Tshwane Open in March but he then missed his next eight cuts. He was eighth in a return to form two starts ago on the Sunshine Tour.

100 to 200: Jaco Prinsloo. A winner two starts ago on the Sunshine Tour Prinsloo also won in June at a lower-tier event. With the tournament taking place at a venue which hasn’t hosted a high level tournament in over 15 years and lacking star quality local a player on the rise like the 28-year-old who has climbed 270 places in the rankings since the start of the year to 618.

Cameron Smith’s victory on Sunday comparing him to the ‘other’ Cameron Smith who won the Rugby League World Cup on Saturday night when Australia beat England 6-0.

All jokes aside with the ‘other’ Smith (the Golden Boot-winning, Kangaroos skipper that is) the golfing Smith continues an impressive rise. Smith banked about AUD274,331 with his weekend win. Combining the first two events of the 2018 PGA Tour season and all of the 2017 season Smith grossed just short of AUD 4 million (USD3,975,457) on the US PGA Tour.

By way of comparison the NRL title-winning and Queensland State of Origin skipper whose biggest wins are regularly watched by over 1 million Australians, would probably make a maximum of AUD1.5 million when you consider his likely NRL and representative wages. Smith the elder would be known by more Australians than the golfing Smith ten years his junior but his direct playing salary doesn’t reflect that when compared to the now world number 61 golfer.

Prizemoney aside Smith’s twin victories in 2017 have him among a group of five Australians to win a standalone or co-sanctioned tournaments in 2017 across the top two tours – the PGA Tour and the European Tour. Marc Leishman (twice), Jason Norris, Wade Ormsby, and Brett Rumford are the other four. If we stretch it back to the start of the 2017 season across each tour in late 2016 we can add Sam Brazel and Rod Pampling to that list so that makes it seven Australian’s winning worldwide at the elite level in the last year or so. What is notable about that list is the absences… Major winners Jason Day and Adam Scott did not manage a win in 2017 they are currently ranked 12th  nd 31st respectively.

The consensus is Tiger Woods put in a better effort at the Hero World Challenge and his three sub 70 rounds would indicate so as would some of his classy eagles. The period he lead the tournament after his ninth hole on Friday was a something to give fans hope for a solid if not necessarily spectacular return in 2018.

Last year Woods was 14 strokes from the winner and this weekend he was ten behind Fowler. Last week we said anything better than last year would be improvement and it was. Whether Woods, who has signaled he will focus his scheduled around playing the majors in 2018, can stand up to the rigors of regular tournament golf as opposed to an 18-player invitational event is a huge question. However this weekend was better than I had anticipated. Wait, I’m starting to believe again… He’s wooing me back dammit!

Back in a few weeks.

The latest edition of the Rugby League World Cup was hosted in Australia, New Zealand and Papua New Guinea with the women’s event taking place in Sydney before the final was played in Brisbane in conjunction with the men’s decider. Come Saturday night in the Queensland capital Australia had defended both the titles they won in England in 2013 as the Jillaroos beat the Kiwi Ferns by seven points 23-16 before the Kangaroos edged England 6-0 to retain the Paul Barriere Trophy.

Saturday night’s tournament denouement saw a compelling final decided by Australian back-rowers Boyd Cordner’s 14th minute try and the resultant conversion from skipper Cameron Smith. Australia missed chances in each half with star fullback Billy Slater among those to go close to scoring but England will rue their own inability to create many chances with Wayne Bennett’s side looking most likely to score from long-range. The difference between the two sides was the lack of impact from England’s halves Kevin Brown and Luke Gale on the rare occasions they reached the Australia ‘red zone’ (final 20 metres.)

England were not helped by a litany of errors, 12 in total, but this only added to the drama which managed to live up to the expectations set by the earlier group stage contests and gripping matches played in the knockout stage to date. England were able to blunt some of Australia’s attack on kick return by kicking most of the night towards the wing of Dane Gagai (25 runs for 238 metres.) Gagai is a talented player but has not been in the form of the other Australia winger Valentine Holmes at this tournament nor does the future Souths players have the experience of fullback Billy Slater. This managed to blunt some of the Australian attack early in their sets.

Try-scorer Cordner was a standout for the home side with 160 metres from 16 runs the most of any forward in the match and he played all the game bar eight minutes. England’s Chris Hill, playing on 42 minutes of the match ran for 131 metres, a team-best among their forwards, from his 11 runs. Aside from the lack of direction from their halves England appeared to miss the injured Josh Hodgson with James Roby starting the fixture at number nine. A fit Hodgson with Roby coming off the bench running and tired Australia forwards may have generate the crucial extra line-break England needed to cross the Australian line. The final result meant Australian coach Mal Meninga remains unbeaten in the role (13-0) and becomes the first person to captain and coach their nation to a World Cup final win.

In the women’s decider the match was, like the later men’s game, delicately poised at the break 12-10 in favour of Australia. Jillaroos halfback Caitlin Moran, who jinked over in the opened stanza for a four-pointer, was a key player in the game but also let the Kiwis back into the contest in the final stages. Up 22-10 and Australia looked to be in control when Moran rushed up out of the line on the right edge and the Kiwis shifted the ball wide for Raecene McGregor to score 12 minutes from time. The fact New Zealand, who conceded four penalties in the opening 20 minutes of the second half, were some hope of winning shows how much Tony Benson’s side has improved. North Newcastle’s Moran redeemed her earlier error to slot the match-sealing field goal in the final seconds as the Jillaroos retained their crown.

The World Cup returns to England in 2021 with North America set to host the 2025 edition. With the Toronto Wolfpack possibly heading to the Superleague in 2019 should they win promotion from the second tier next season, more dedicated dates for international rugby league fixtures and growing interest in establishing women’s competitions the next two events have scope for expansion with more international interest in the game. The women’s event this year had six teams so could be expanded but work needs to be done on the relevant pathway. As Jillaroos coach Brad Donald noted when speaking to Steve Mascord the NRL was still trying to ‘figure out what the talent pool is like’ indicating a staged process of installing a competition with all 16 NRL sides immediately implementing women’s teams unsustainable in terms of quality and player development. In the men’s game the focus will likely be on not just more games in the coming few years but which players turn out for which sides. Whether tier two nations continue to enjoy good luck in adding players eligible for tier one sides to their line-ups may come down to whether a financially sustainable model can be implemented for not just tournaments but tests played in the intervening period. Stay tuned for more cracking international rugby league in 2019. 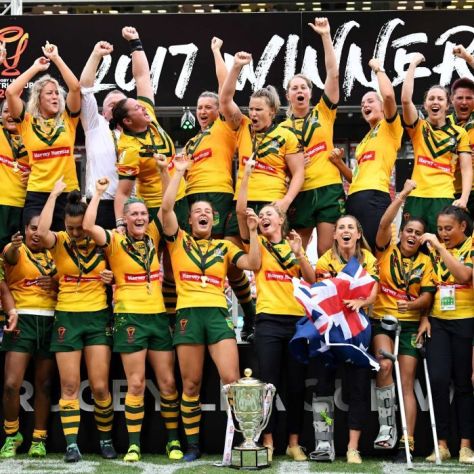 Images via sportingnews.com.au and abc.net.au

Bringing you insight and thoughts in the world of sport with a focus on rugby league and football.